The Resource Management Act 1991 requires Auckland Council to recognise, provide for,
and protect historic heritage as a matter of national significance under the Act. The Council’s methods to achieve this include the listing of items on a schedule in the District Plan. The schedule contained in Appendix 11A of the Auckland Council District Plan (North Shore section) recognises and protects particular buildings, objects, properties and places valued as part of North Shore’s historic heritage.

Plan Change 38 introduces changes to Chapter 11: Cultural Heritage of the North Shore
section of Auckland Council District Plan. The proposed changes are focussed on the
schedule of historic heritage resources of the District Plan contained in Appendix 11A:
Schedule of Buildings, Objects and Places of Heritage Significance and associated map
changes.

An example of the proposed changes: 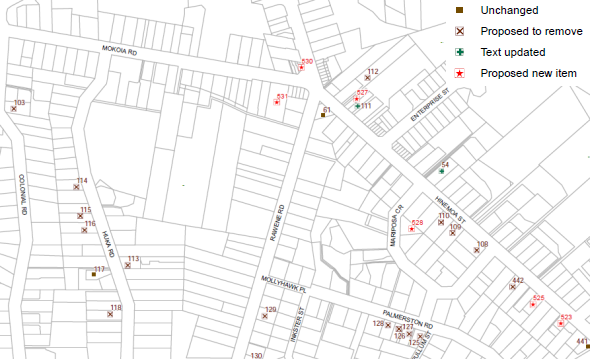 The Birkenhead Residents Association made a submission on Plan Change 38 on 23 August.
Click here to View and / or download the Submission (PDF)

The Kaipatiki Local Board adopted an excellent submission on Plan Change 38.
Click here to View and / or download the Submission (PDF)

How will this impact Birkenhead?

If you would like to be part of the Birkenhead Residents Association sub-committee looking at how these proposals will impact Birkenhead, please contact us NOW!

The changes proposed in Plan Change 38 involve the following: 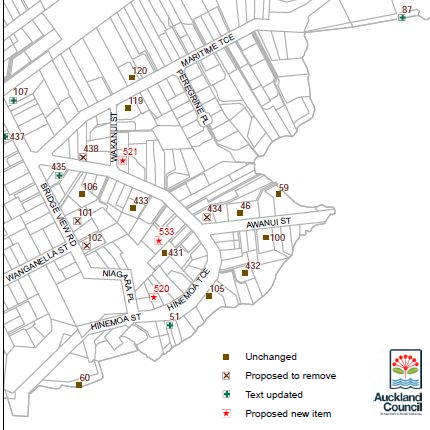 If you would like to be part of the Birkenhead Residents Association sub-committee looking at how these proposals will impact Birkenhead, please contact us NOW! 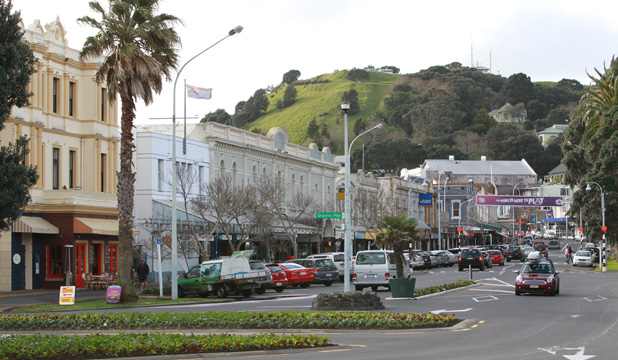 KEEPING CHARACTER: Eleven commercial buildings on Victoria Rd have had their heritage status downgraded by the Auckland Council.

Mr Gillon says recent changes to the district plan heritage schedule leave him suspicious that the Auckland Council is making way for development.

“I see plans coming out advocating intensification and then these heritage changes happen in areas that are considered city fringe,” he says.

“When protection is removed it leaves these areas vulnerable and it’s like we’re one step closer to development.”

The council says the removal of almost 100 houses and downgrading of 35 buildings will not affect their level of protection because they are in areas that already have heritage zoning.

Devonport, Birkenhead Pt and Northcote Pt are all zoned residential 3 with tight controls over demolition and renovations.

But Mr Gillon says the council is doing a major zoning overhaul later this year and these areas are not guaranteed to keep their character zoning.

“I don’t think there’s a lot of confidence they will be protected,” he says.

She is most concerned about the change of status from heritage A to B for a row of commercial buildings on Victoria Rd which removes the need to notify the public of any alterations.

This means it will be in the council’s hands to allow alterations, which Ms Paige says is very worrying.

“The council has a had a pretty poor record of dealing with discretionary matters,” she says.

Ms Paige says three category B heritage houses in Rata Rd, Devonport, have been either demolished or substantially renovated after the council used its discretionary power to give the green light on changes.

She is happy with the new additions to the heritage list, including local sports clubs but says the changes could have waited until after the unitary plan is drafted.

“It’s a bit presumptuous and too soon when we have the zoning revisit in the pipeline.”